At the heart of a great forest stands Château de Chambord, which was built by King Francis I who was both a medieval knight and Renaissance philosopher. Built as a royal hunting lodge, workers began clearing the area for construction of the structure in 1519. The castle resides near the fertile valley of the Loire River in the heart of France, both geographically and spiritually. Specifically, it was this region where a century of war with England occurred and the idea of France as a nation took shape. Eventually, the enemy was turned back at this location and kings and queens of France would build the most beautiful castles in the world. 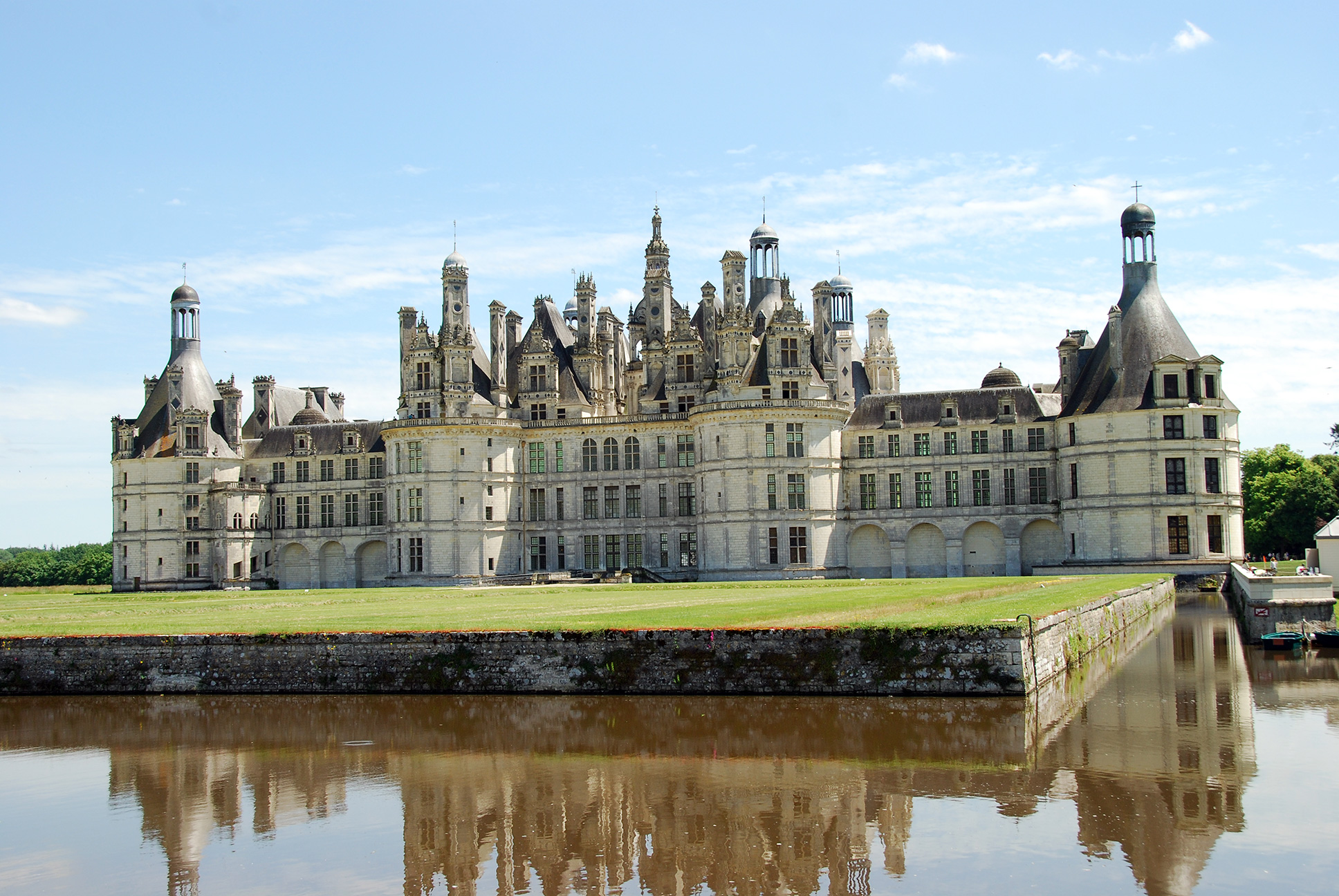 In 1515, Francis succeeded his cousin to the throne. Shortly after his coronation, he left to regain the Duchy of Milan territory within the Holy Roman Empire previously lost by his family. Today, this region comprises part of northern Italy. Francis succeeded and during his stay in Milan saw firsthand the works of various Renaissance artists and architects. He even persuaded the aging Leonardo de Vinci to accompany him to France along with his famous painting La Gioconda better known as the Mona Lisa.

Several years later, King Francis was captured and held captive by the Holy Roman Emperor, Charles V, in Milan from 1524 to 1526. As a result, construction at Chambord was halted during this period. Following his release in 1526, he continued expansion of the castle by adding wings to each side of the keep. The East Wing to house royal apartments and West Wing the Chapel. In 1535, the Donjon or central keep was completed. A primary historical meeting occurred at Chambord in 1539. During a truce between Francis and his rival, Charles V, who was invited to visit Chambord. During the week-long celebration, Charles was so impressed he declared Chambord and all its trimmings “a synthesis of all that human effort can achieve.”

Construction of the Royal Wing was completed in 1547, the same year of King Francis' death that marked the end of the golden age of the Loire Valley. Although, the royal family relocated to Paris thereafter, the king's son, Henry II, continued construction on the castle as it was used occasionally as a Royal Hunting Lodge. Henry's legacy remains in the form of his monogram “H” on various columns within the Chapel. Thereafter, Château de Chambord remained predominantly vacant for the next 400 years.

For a brief time in the 17th century when King Louis XIV reigned France, he stayed at Chambord more often than any other French monarch. It was Louis who completed the Chapel Wing in 1685 upon adding the roof and vault. He also built the King’s Bedchamber within the central keep. Today, craftsmen and stone masons continue restoration work on the castle.

Château de Chambord represents one of the most widely recognized Chateaux in France due to its distinctive French Renaissance architecture, which combines French medieval and Italian Renaissance features. With its many turrets, dormers and towers, the château has been likened to both an overcrowded chessboard and woman whose long hair was blown loose by the wind.

Architecture within Château de Chambord bears the marks of Leonardo de Vinci. The large spiral staircase in the center of the Donjon or keep is actually two staircases wrapped around one another. A person can ascend while another descends without ever passing each other. The original plans included four intertwined staircases but builders simplified them to include only two. Unique terraces along the rooftop were constructed so ladies of the court could watch hunts in the nearby forest and admire the gallantry of their lords.

Francis’ chosen emblem was the salamander as it constituted a symbol of devotion and integrity. It is depicted no less than 800 times within Château de Chambord. Due to its vast size, Château de Chambord, in conjunction with unoccupied status for long periods of time, furnishings therein are sparse with most rooms empty. Furnishings were usually brought with the Royal court during visits and removed upon their returning to Paris. However, there are some furnishings including the bedchamber from Louis XIV, which still includes the bed and tapestries.

Château de Chambord exists as the largest castle in the Loire Valley with 440 rooms and 365 fireplaces. The castle and grounds can take an entire day to visit, especially if walking the grounds. However, if only half a day is spent touring the castle, Château de Chenonceau is close enough to visit the same day.

Sign posted along the A10 between Orleans and Tours.