Leeds Castle was built around 1119 by Robert de Crevecoeur (Robert the broken hearted) with a keep located where the present day Gloriette resides. The castle is built atop two small islands giving it the extra protection of a moat. It’s location in Kent is in a strategic location defending the country from invasions from potential invaders from the southern coast.

After the Battle of Evesham in 1265, the family fortunes declined and the de Crevecoeur family was forced to yield the castle to Sir Roger de Leyburn, whose son William, conveyed the castle to King Edward I and his queen Eleanor of Castile in 1278. And so began a long stretch of royal ownership of the castle. 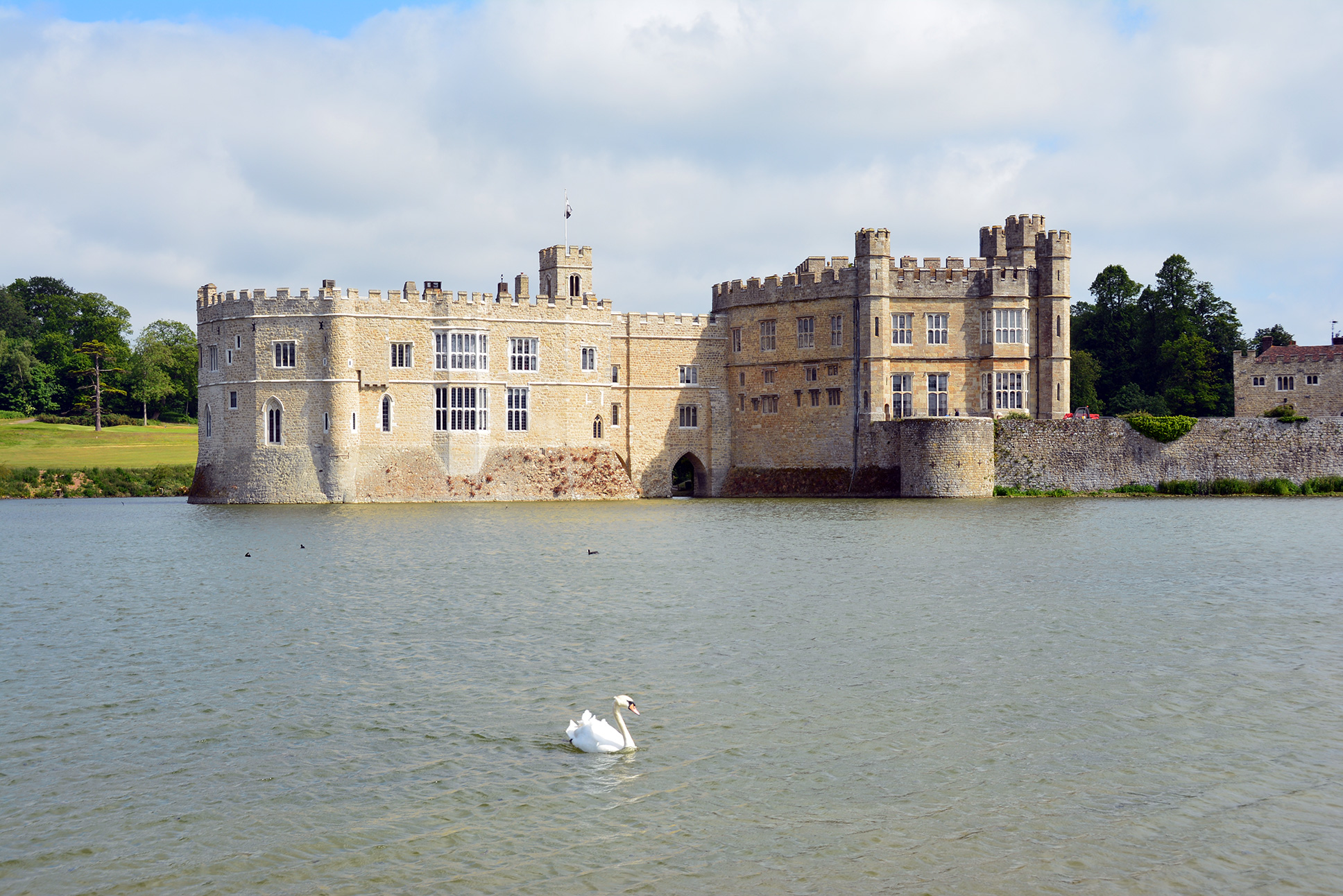 Edward and Eleanor enjoyed the castle and stayed here often. It was Edward and Eleanor who began many refinements at the castle including the Gloriette, glass windows, the Queen’s Baths, one of the first Bathhouses in England, and a barbican and fortified mill. Eleanor died in 1290 and in 1299 Edward married Margaret, sister of King Phillip III of France. Edward and Margaret spent their honeymoon at Leeds Castle. The King granted Leeds Castle to Margaret shortly after their honeymoon, starting a pattern whereby the castle often became part of the dower of the Queens of England.

In 1318, Edward II gave Leeds Castle to Bartholomew Badlesmere in appreciation for loyal service to the crown. But Badlesmere would later join a rebellion against the King. In October 1321, Edward’s wife, Queen Isabella, the she-wolf of France, arrived at Leeds Castle to rest and take refuge. Isabella was denied access by Margaret Badlesmere while her husband Bartholomew was away. Archers from within the castle fired arrows at the royal party. Not pleased, King Edward along with an army besieged the castle and took possession within a week. Not long after, Bartholomew was captured and beheaded.

In 1403, King Henry IV granted Leeds Castle to his second wife, Queen Joan of Navarre. In 1419, her step son, Henry V accused her of witchcraft and had her imprisoned. She was kept at Leeds Castle for 4 years. Eventually she was quietly released.

By the start of the 16th century Leeds Castle had fallen into disrepair after decades of neglect; until the time of the Tudor Dynasty, when Henry VIII and his entourage stopped at Leeds Castle on his way to meet Francis I of France at the Field of the Cloth of Gold in 1520. Henry started major works on Leeds Castle in 1517 to prepare it for their stay. The upper story of the Gloriette was added which included a private bed chamber and bathroom for the queen. The Maiden’s Tower was added for the queen’s ladies in waiting. By 1552, having lost most of their possessions in France, the English royals had no further need of Leeds Castle and granted it to Sir Anthony St. Leger of Ulcombe, ending the royal connection with the castle.

In the mid 1660’s, Leeds Castle was leased to the government by then owner Lord John Culpepper. The castle was used to retain French and Dutch prisoners who occupied the Gloriette and on one occasion set fire to it, causing damage that remained until 1822.

In 1926, Leeds Castle was bought by Lady Baillie who restored the run down castle into a stately home. The castle experienced a renaissance and hosted lavish parties; entertaining celebrities, ambassadors and royals. In 1939, World War II started and Leeds Castle had to adapt to a new way of life. The family moved into the Gloriette and the moat was drained so the castle could not be as easily identified by German pilots flying over the Kent countryside. Leeds Castle also served as an emergency hospital during the war. The castle survived the war undamaged with a few bombs being dropped within the castle grounds.

When Lady Baillie died in 1974, she left the castle and its surrounding park to the Leeds Castle Foundation, which she started towards the end of her life to ensure Leeds Castle would endure.

Leeds Castle has come to be known as “The Loveliest Castle in England”, given its picturesque setting on two islands in the Kent countryside. I have visited the castle in the dead of winter and the height of summer and it’s a magical place at any time of year and lovely indeed.

It’s also known as the “Ladies Castle” given the number of Queens and influential woman who have had a hand in its history and evolution. The interior of castle can be visited by self-guided tour. The Gloriette is the highlight of the castle, with its Tudor style furnishings and paintings. Having been built for Queen Catherine, the Queen’s Room, Queen’s Bathroom and Queen’s Gallery all give a good representation of what life was like during the reign of Henry VIII.

King Henry VIII’s Banqueting Hall is also impressive, measuring over 73 feet in length. It contains important paintings and sculptures and the earliest known Enghien tapestry, retaining the town’s and weaver’s marks, dating from between 1513 and 1535.

The grounds of Leeds Castle are massive with lots to see and do. There is an aviary, hedge maze, grotto and formal gardens to explore. There is also a falconry area where falconry displays take place. There is a small train that takes visitors from the entrance to the castle, but I recommend walking back to the entrance to take in the views of the castle from the edge of the moat. With black and white swans in the moat and reflections of the castle on the water, this is what gives the castle a fairytale feel and undoubtedly where it earns the title the loveliest castle in England. I recommend setting aside a whole day to explore Leeds Castle.

Sign posted off the M20 between Maidstone and Ashford.