Lewes Castle resides in East Sussex England as one of the first castles in England following the Norman Conquest and Battle of Hastings in 1066. It was built by William de Warenne between 1068 and 1070 in the Norman motte and bailey style similar to most castles of the period. Lewes Castle is different than most Norman motte and bailey castles in that it has two mottes, or hill top keeps, much like Lincoln Castle in Lincolnshire. William also owned other structures including Castle Acre in Norfolk and Conisbrough Castle in South Yorkshire. 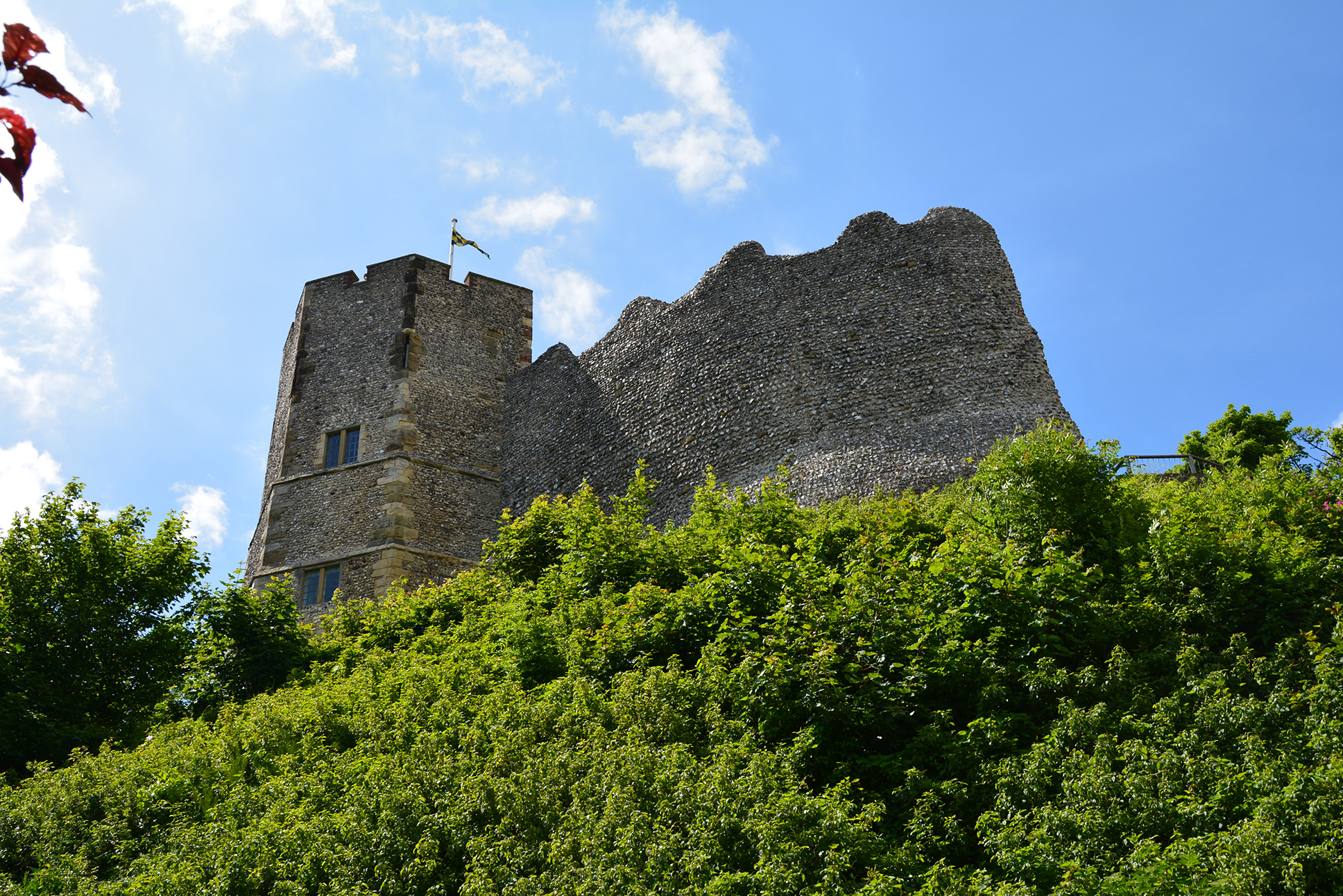 The original castle consisted of a courtyard or bailey surrounded by a wooden curtain wall and the Brack Mount motte with a wooden shell keep crowning the hill. At the beginning of the 12th century, a wooden gatehouse was added to the curtain wall and a keep constructed atop the second motte consisting of wooden palisades or fences, which were eventually replaced by stone. By the early 13th century, the South Tower and West Tower were added to the outer walls of the keep to give archers a wider target area for defense purposes. There may have also been a third tower along the northern wall of the keep. Neither the presumed third tower nor northern wall currently exist.

On May 14th of 1264, the Battle of Lewes was fought in the fields below the castle. It was one of two primary battles of the Second Barons’ War. The battle served as the high point in the life of Simon de Montfort, the 6th Earl of Leicester. King Henry III left the safety of Lewes Castle to engage the Barons in battle. Henry’s son, Prince Edward, later Edward I, routed part of the Barons’ army with a cavalry charge and chased the retreating army off the battlefield leaving Henry III and his army exposed. Henry was forced to sign the Mise of Lewes, surrendering many of his powers to Montfort.

In the 14th century, the barbican was the last addition made to the castle. There was most likely a drawbridge leading to the entrance way of the barbican over a deep dry ditch, where today, a cobblestone road exists. Lewes Castle remained in possession of the de Warenne family for nearly three hundred years. When John de Warenne died in 1347 without any heirs, the castle passed to his nephew, the Earl of Arundel, who already owned great estates. Thereafter, the castle began to slowly fall into decline. In 1381, during the Peasants Revolt, the castle was attacked by a mob who broke inside and stole casks of wine, as well as destroyed several documents.

By the 17th century, Lewes Castle was quickly becoming nothing more than a ruin. Later in the 18th and 19th centuries, some restoration work was conducted. The West Tower was altered and arrow slits were replaced by Gothic style windows. However, the flared medieval embrasures were left in place. The Sussex Archaeological Society leased the keep and barbican for a display of local antiquities and was granted the freehold in 1920. The castle still remains in their care today.

Lewes Castle is tucked away off a side street along the High Street in Lewes. Car parks located around the city afford easy walking distances to the castle. Tickets to enter the castle are available for sale at the Barbican House, directly across the street from the castle. It also has a museum containing various artifacts from the surrounding area, which is well worth a visit after touring the castle.

Upon entering the castle grounds, you should notice the magnificent 14th century barbican across the courtyard. It is considered one of the best examples of a medieval barbican in England with all the standard features of a well-designed barbican. These include murder holes, tall doorways to allow horse and cart access, portcullis and drawbridge. Machicolations are also present at the top of the barbican, where guards could drop rocks on persons from above while remaining protected.

The South Tower of the keep has a spiral staircase allowing access to the upper floors and roof from which you can see a stunning 360 degree view of Lewes. The roof and its view were utilized as a lookout point for members of the Observer Corps during World War II. In addition, the battlefield where the Battle of Lewes was fought may be seen from the keep to the left of the West Tower.

In the City Center of Lewes.