Burg Maus resides on a mountain spur overlooking the Rhine River above the town of Wellmich. Originally called St. Peterseck and later Burg Deuernburg (Thurnberg), the castle came to be known as Burg Maus due to the cat and mouse rivalry between the Catholic Church and the powerful counts of Katzenelnbogen who owned nearby Katz Castle (Burg Neukatzenelnbogen). 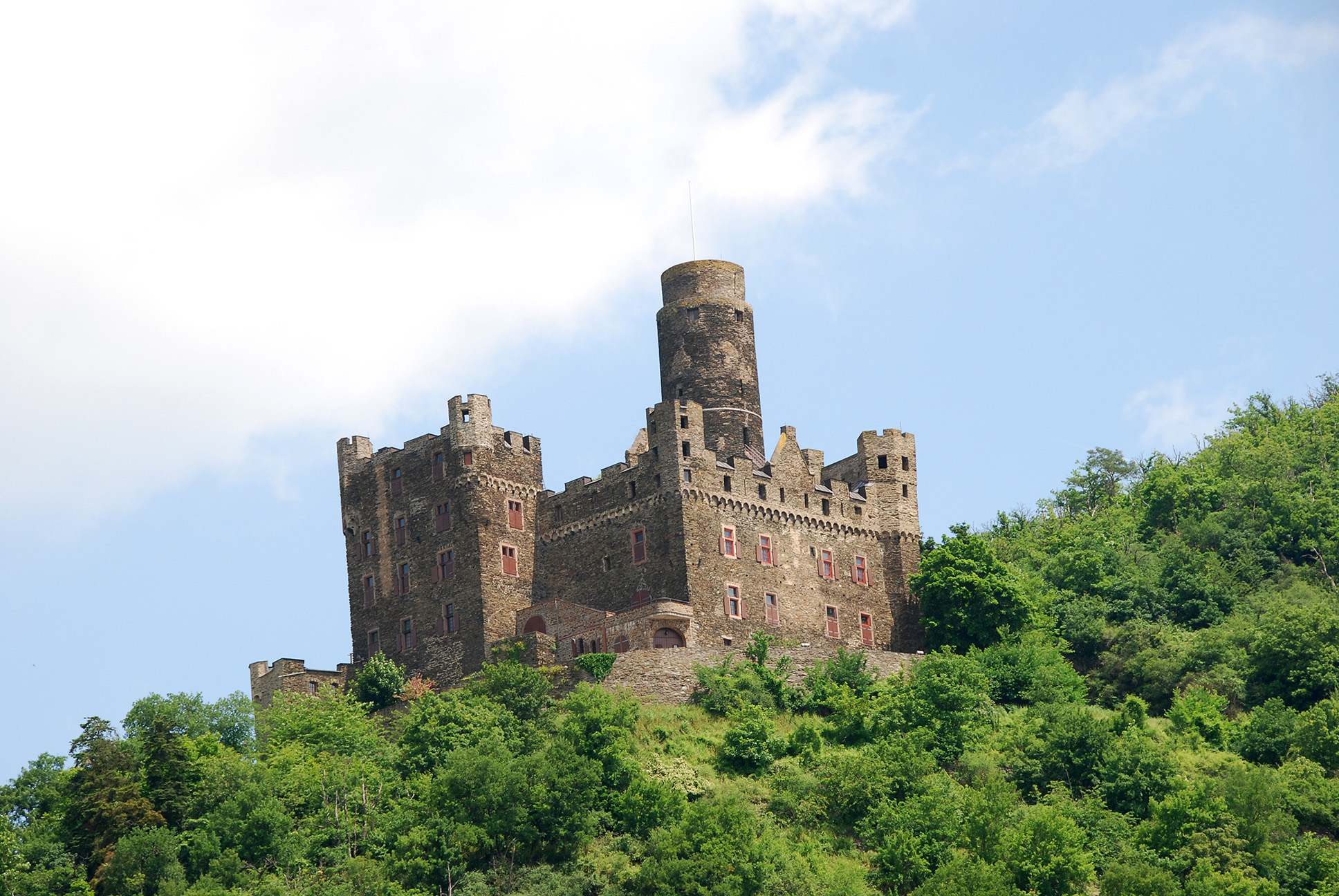 Construction of Burg Maus began in 1356 by Archbishop Bohemond II of Trier who occasionally lived at the castle. The orignal castle included the round tower, shield wall, residential building and residential tower. The castle was built to enforce tolls on boat traffic along the Rhine River and to secure the land possessions of Trier on the right bank of the Rhine that bordered lands of the counts of Katzenelnbogen and their castles of Burg Katz further down river and Burg Rheinfels directly across the river.

Construction of the castle was completed by Bohemond’s successor Kuno von Falkenstein between 1362 and 1388, who extended the residential tower to add a fourth floor and corner turrets.

Unlike neighboring castles, Burg Maus was never destroyed, but did fall into disrepair starting in the 16th and 17th centuries. In 1806 it was auctioned off for demolition and used as a quarry, but never completly demolished. Around 1900 it was bought by the architect Wilhelm Gärtner who restored the castle between 1900 and 1906 in great historical detail.

Burg Maus also suffered damage during World War II when it took on shellfire, and was subsequently repaired again after the war.

Today, the castle retains most of its original structure and design. The most prominent feature is the round tower built in the middle of the shield wall. The square residential tower with corner turrets dominates the west façade of the castle nearest the Rhine River and was used as the residence of the Archbishop. The castle also contained a private chapel, along the southern wall.

The best views of the castle are from the opposite bank of the Rhine River or from the river itself if you partake in a river cruise.

Like its neighbor Burg Katz, Burg Maus is privately owned and not open to the public on a daily basis, but does occasionally host events which sometimes include guided tours. The Knights’ Hall can also be rented for festive occasions such as weddings, anniversaries or conferences. Contact the castle for more information regarding booking availability and prices.

Off the B42 along the Middle Rhine above the town of Wellmich, Germany.