The lack of gold in the sands of the River Rhine forced greedy lords and barons to fight those who brought it from elsewhere or otherwise tax merchants traveling along the Rhine with their fortunes.

Sir Diethelm of Burg Rheinstein was not rich and opportunities to become affluent always slipped through his fingers. Whenever he suffered from lack of wealth, he found consolation by thinking of his beautiful daughter, Gerda. Once Gerda reached marrying age, her father often daydreamed of a rich suitor who would share his fortune with him upon marriage to his daughter.

Helmbrecht, eldest son of the old Knight of Sternberg Castle, lacked neither looks nor youth, but did lack riches and family fortune. However, this did not prevent him from wooing Gerda. Helmbrecht went to his uncle, Gunzelin of Burg Reichenstein, and asked him to speak to Gerda's father on his behalf. Gunzelin was a grey haired giant possessing a vast fortune. Due to the close proximity of Burg Reichenstein and Burg Rheinstein, Gunzelin was well aware of Sir Diethelm's desire regarding a wealthy son-in-law. At their first meeting, Gunzelin found Gerda so beautiful he asked for her hand in marriage. While his nephew originally intended to marry Gerda, he wanted Gerda as his wife no matter the cost. Blinded by Gunzelin's wealth and stately appearance, Gerda's father agreed to their marriage. The ceremony was scheduled for a few days later in St. Clement's Chapel of Trechtingshausen, which lies on the banks of the Rhine between Burg Reichenstein and Burg Rheinstein. However, Gerda became quite distraught upon discovering the name of her future husband. After all, her desire was to marry Helmbrecht and Gunzelin was an elderly man in her view. As she cried aloud with anguish, her father attempted to explain his reasoning but to no avail. The young girl went to the castle garden and broke into tears.

As everyone knows water creatures are attracted to tears from near and afar. The tears from Gerda were no exception to a water-nymph who lived in a small stream flowing from the Hunsruck Hills near the castle. The water-nymph who heard Gerda's sadness, knew what needed to be done.

On the day of the wedding, the bride and groom began their journey to St. Clement's Chapel. This route included a hornet's nest firmly entrenched at the side of the road. As the couple approached it, the water-nymph threw a jagged rock right into the hornet's nest. As a result, the hornets swarmed and began stinging the horse, which was transporting the couple to the chapel. The horse stood on his hind legs and threw Gunzelin over a cliff to his death. Gerda was rescued by Helmbrecht who was wallowing in his sorrow near the chapel. A week later, Gerda von Rheinstein married Helmbrecht in the same St. Clement's Chapel where, after a lifelong happy marriage, they were both laid to rest. 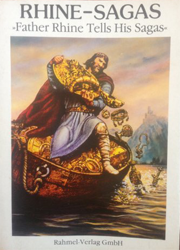