Trim Castle resides in County Meath within Ireland along the banks of the River Boyne. It was built during the late 12th century after Hugh de Lacy was granted Lordship of Meath by Henry II in an effort to limit expansion by Richard de Clare, Earl of Pembroke, also known as Strongbow. Strongbow was an ambitious baron whom Henry feared would facilitate an independent Anglo-Norman kingdom in Ireland, if left unchecked. 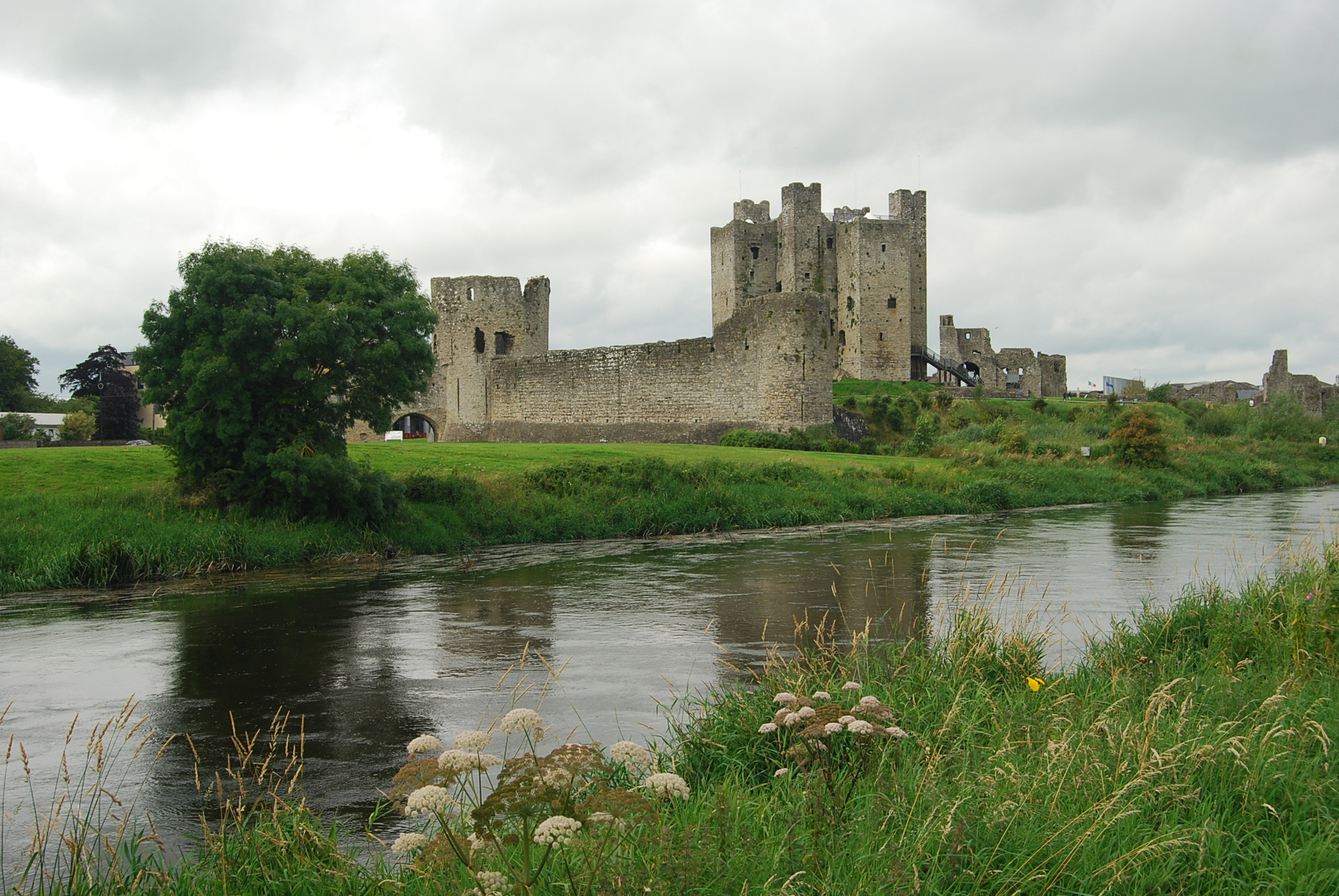 Upon Hugh de Lacy's arrival in Ireland, he supplemented the castle with a wooden fortress and spiked stockade, as mentioned in the poem “Song of Dermot and the Earl” composed during that time period:

De Lacy departed for France in 1173 and left Trim Castle in the care of a baron by the name of Hugh Tyrell. However, Ruardhi O’Connor, King of Connacht, who considered the land his own attacked Meath and eventually burned the vacated castle to the ground. Upon Tyrell's returned in 1176, he rebuilt the structure beginning with a stone keep. Once constructed, it was surrounded by a curtain wall, gate and moat. In 1196, the keep was enlarged by adding two new floors, as well as a Great Hall on the third floor. Eventually, the Great Hall proved too difficult to access for larger public gatherings, and consequently, was eventually divided into separate rooms.

In 1194, Walter de Lacy attacked lands owned by Prince John when John served in conflict against his brother, King Richard I. Upon reconciliation between the king and prince, Walter was deprived of his lands until he agreed to pay a large fine in return for the king’s benevolence. Following the death of King Richard I in 1199, John became king and Walter his servant. Walter remained in England while his lands were administered by royal officials. In 1207, King John and Walter de Lacy reconciled and Walter returned to Trim Castle. After a brief visit to England in 1223, Walter de Lacy returned and besieged the castle for seven weeks in 1224, reclaiming it from his rebellious brothers who took control during his absence. Upon Walter de Lacy's death in 1241, the castle passed to his granddaughter, Maud, who married Geoffrey de Geneville in 1254, which constituted the beginning of a period of prosperity for Trim Castle. During this time, a new Great Hall was constructed along the north curtain wall and north tower converted into a solar (private apartments). In 1306, de Geneville’s granddaughter Joanna, married Roger Mortimer, 1st Earl of March. Their descendants retained ownership of the castle for approximately 120 years until the death of Edmund, 5th Earl of March in 1425.

During the 15th century, Trim Castle was used to host parliaments on seven occasions. By the 16th century, it existed in an advanced state of decline and was eventually abandoned. In the mid-16th century during the Cromwellian Wars, the castle was pillaged by soldiers and inhabitants of the town who took roof beams and lead from the dilapidated structure. In 1993, Trim Castle was purchased by the state from Lord Dunsany. Today, it is managed by the Heritage Service of the department of the Environment and Local Government.

Trim Castle is the largest castle in Ireland and represents a fine example of 12th century Anglo-Norman domination in Ireland. Its architecture is accentuated by a stunning keep in the shape of a Greek cross. In addition, the Trim Gate to the west retains enough of its original structure to convey a sense of the once massive form. Today, it serves as the main entrance to the castle for visitors.

The Barbican Gate and remains of the 13th century curtain walls on the east end of the castle are equally impressive. Both may look familiar as they were shown in the 1995 movie Braveheart starring Mel Gibson who portrayed William Wallace as a late 13th century Scottish warrior. The keep represented the Tower of London and Edinburgh Castle while the Barbican Gate and curtain wall were present in the background during Wallace's visitation with the Princess of Wales after he crossed the River Boyne via wooden barge to meet her.

I highly recommend taking a guided tour of the castle, as well as crossing the River Boyne to enjoy awe-inspiring views from a distance. There are bridges at either end of the castle to cross the river.

Just off Castle Street in the town of Trim.