The first castle at Helmsley in North Yorkshire England was built by Walter Espec sometime after 1120. Unlike many motte and bailey style castles constructed during the period, Helmsley Castle was constructed with a ringwork architecture consisting of two concentric earthwork rectangular ditches topped by timber breastworks or palisade walls for added defenses. Its rectangular shape and location resulted from limestone outcrop underneath. Despite its fortifications, the castle was not intended to defend a strategic route through Vale of York situated in Northern England. 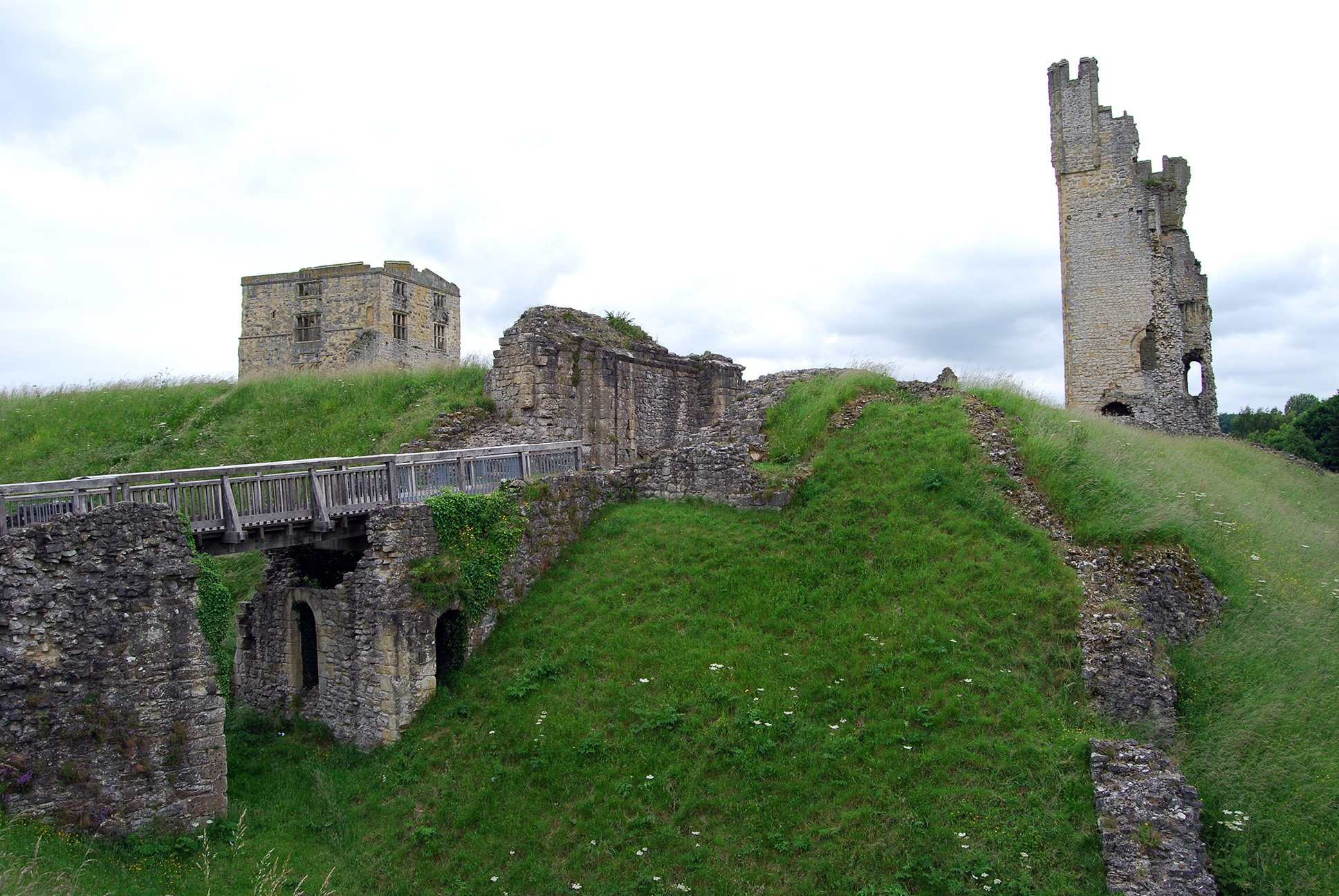 When Walter Espec died in 1154, his estate including Helmsley Castle passed to Peter de Ros, husband of his sister Adelina. More than 30 years later, Peter de Ros’ great grandson, Robert, rebuilt Helmsley Castle using stone as recorded in Chartulary of Rievaulx Abbey, which stated he “raised the castles of Helmsley and of Wark.” The core of surviving castle dates from this period. Robert leveled the inner bank and replaced it with a stone curtain wall adorned with rounded corner towers. The main entrance was placed below a square-shaped tower while additional gatehouse with twin round towers was constructed along the north curtain wall. Two great towers located on east and west portions of Helmsley completed its defenses. The East Tower is “D” shaped and exists as largest portion of the castle. Unlike many other castles of the period, there was no central keep.

Late in his life, Robert divided his estates and passed them to his two sons. William received Helmsley and Robert received Wark. William was content to leave Helmsley Castle much as his father left it aside from building a new chapel within the inner bailey to replace the one located in the East Tower. The modification was consecrated in 1246. William’s son, also named Robert, made additions to the castle during the late 13th century. These included addition of barbicans to strengthen North and South gatehouses, as well as remodeling of South Gate. Robert’s son, William who served as Lord Ros of Helmsley, inherited the estate and castle in 1285. He added domestic buildings and accommodations, presumably to house men at arms. The domestic buildings included a grand hall and kitchen located in southwest corner of the inner bailey. The East Tower was also raised by a full story to its present height along with angled turrets atop each corner. The lordship of Helmsley remained in the de Ros line until 1478 when it was sold to Richard, Duke of Gloucester and future King Richard III. Following Richard’s death at the Battle of Bosworth Field in 1485, ownership of Helmsley reverted to the de Ros family.

Helmsley Castle, though strengthened against potential attack, did not serve as a central location of battle until the English Civil War in the 17th century. The castle garrisoned troops for the king, however, it was subsequently besieged from September to November in 1644 by Parliamentarian forces under Sir Thomas Fairfax. During the conflict, Helmsley Castle was honorably surrendered as troops inside were permitted to march out with their small arms and promptly join the Parliamentarian army.

However, fate of the castle was not so forgiving as Sir Thomas Fairfax was required to render it indefensible. This included annihilation of the East Tower. Today, approximately half of the original still lies in the ditch where it fell long ago. The ruins of Helmsley Castle are currently managed by the English Heritage.

Helmsley represents a fine example of an English ringwork style castle. Although a ruin, enough of the castle remains today to comprehend its grandiose appearance prior to destruction centuries ago. While only about half of the East Tower remains above the inner bailey today, it still constitutes the most impressive part of the castle. Due to its enormous size, the tower is often mistaken for a keep however, Helmsley Castle was never constructed with one.

The earthworks surrounding the castle are rivaled only by those at Castle Acre and Castle Rising Castle in Norfolk to the south. How imposing they must have been to an attacker given the high curtain walls atop the earthworks. Perhaps, these attributes served as a deterrent for centuries until Helmsley Castle was besieged in the mid 17th century. Moreover, substantial remains of the South Barbican are worth exploring.

Helmsley Castle is easy to locate along the Town of Helmsley. It should take no more than half a day to thoroughly visit. Located just 12 miles away, Pickering Castle would complete the day with its contrasting Norman motte and bailey style architecture.