This place is for the birds!

Did you know some castles included a building to house doves and pigeons? A dovecote or doocot in Scotland was quite a status symbol and right to own one was sometimes limited to nobility. A dovecot could be built into an existing structure such as Dovecote Tower at Barnard Castle in County Durham England or a free-standing building like the lectern styled one pictured below at Tantallon Castle in East Lothian Scotland. Some dovecotes were frequently beehive shaped, tapering towards a circular opening at the top similar to one at Dirleton Castle located just a few miles from Tantallon Castle. 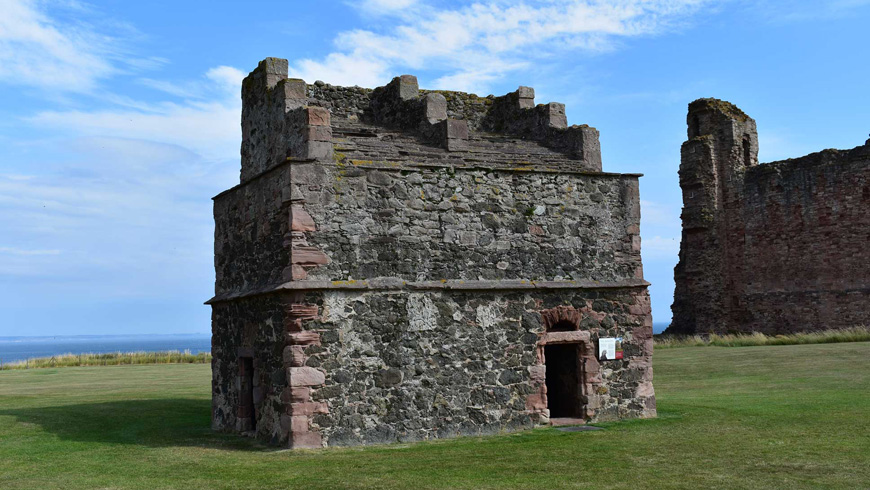 A dovecote consisted of numerous pigeonholes or nesting boxes built along interior walls, which provided space for birds to nest in pairs. Those at Dirleton and Tantallon were built in the 16th century and contained over 1,000 nesting boxes. Given their positioning along exterior walls, central portions of castles were typically empty with the exception of a rotating ladder to climb near the walls to collect eggs and squabs (i.e., young pigeons).

Pigeons served an important role at castles during medieval times. They were a source of meat and eggs in winter months when other meat sources were much scarcer. Moreover, pigeon excrement was utilized to fertilize crops, tan leather, as well as make gunpowder. Occasionally, it was added to mortar as a binding substance for application in stone walls. However, when pigeons outlived their usefulness or became part of the meal, their feathers were often used to stuff pillows and beds.